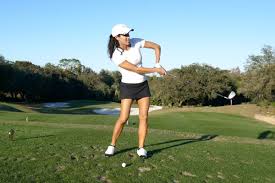 When a golfer’s left elbow buckles outward (toward the target) after impact, the result is a “chicken wing.” Because the swing arc is narrowed and the clubface open, shots typically fly short and often right.

The chicken wing is extremely rare among professional golfers, with Lee Westwood being the most noteworthy exception. On the other hand, it’s fairly common among amateurs and usually caused by one of these problems:

1. Over-rotating the shoulders relative to the hips during the downswing.

2. An overly steep approach angle into the ball.

3. Keeping the head too rigid.

4. Playing the ball too far back in the stance.

In a well-coordinated swing, the right hand and forearm roll or cross over the left through the impact area. The left elbow folds and remains tucked close to the body, rather than bowing outward.

A classic drill used to cure the chicken wing is to place a towel or similar object under your left armpit, then holding it there throughout the backswing and through-swing. First, try it without hitting a ball. You can also use just the left arm to make practice swings.