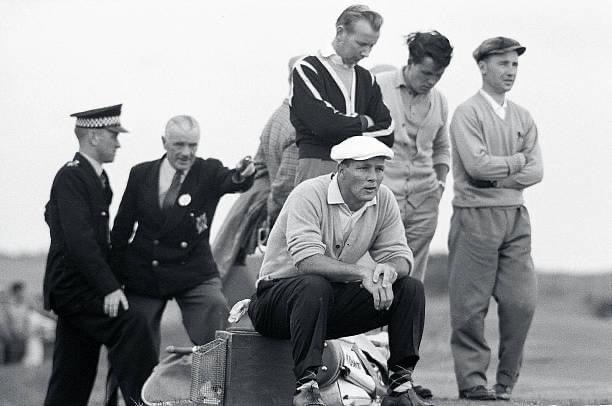 On Sunday of the Open Championship, after a round in which he was caught rolling his eyes, motioning to an imaginary wrist watch, and possibly mumbling uncharitable things under his breath, Brooks Koepka was asked about the challenge of his pairing with the notoriously slow J.B. Holmes.

Here, Koepka, the four-time major champion and part-time slow-play crusader, was measured. It wasn’t that bad, he said. Then again . .

“What I don’t understand, when it’s your turn to hit, your glove is not on, then you start thinking about it,” Koepka said. “That’s where the problem lies. It’s not that he takes that long. He doesn’t do anything until his turn. That’s the frustrating part.”

Koepka’s depiction of Holmes’ anything-but-ready golf routine brought to mind the various ways slow play manifests over 18 holes. Our default image of the slow player is Caddyshack’s Judge Smails hovering interminably over his ball, as if waiting for proper planetary alignment before he can consider pulling the club back. But that’s just one type of slow, perhaps the easiest to identify and arguably the least consequential. In reality, most of the damage can be done before a player even gets to his ball.

So what are the offenses that add up to painful pace? Allow us to count the ways:

1. Idle waiting: As Koepka noted, a precious amount of time can be burnt just waiting for your turn to hit. We’re not advocating anarchy here. At both the competitive and even recreational levels, golfers should still hit their actual shots one at a time. But everything else—calculating yardage, lining up a putt, even taking a practice swing if you’re a sufficient distance removed from the action— can be done while someone else is playing. There’s a certain amount of arrogance in thinking your pre-routine requires everyone else’s attention. Better to assume they’re not missing anything important so you can pull the trigger in a timely fashion.

Related: The most annoying golf partners

2. Bag mismanagement: There is a great misconception that playing golf in a cart is unequivocally faster. In fact, you can move just as quickly—if not quicker—while walking provided you’re not spending a lot of time retrieving your bag from suboptimal locations. Example: you chip from the front of the green to a pin in the back but leave your bag in front when going to putt, which means … you have to go back to get your bag once the hole is over. Instead, when getting to the green just place your bag closest to the next tee box, get the clubs you need to finish the hole, then pick up your bag when walking off. And speaking of carts …

3. Cart mismanagement: The only thing worse than the golfer who manages his bag poorly is the golfer similarly careless with his cart. The typical maddening offense: Golfer X leaves his cart on the cartpath, walks to the middle of the fairway with a 7-iron … Oh shoot, he needs a 6 … so walks back to the cart. Mind you, all of this could be avoided if he brought a handful of options with him in the first place, or better yet, if he even had his next shot in mind as well.

4. “Did I ever tell you about the time . . . “: We all relish the social opportunities that golf provides because it can be the perfect setting for catching up with friends and family. But that does not give license to tell intricate stories on the tee box, when someone is lining up a putt, or when everyone else has their eyes glued to the ground looking for an errant tee shot. Golf should be a game of forward progression. Take advantage of opportunities to connect with your partners in the walks from tees to fairways, or from fairways to greens. Anywhere else, and that time talking is usually at the expense of something else.

5. Game delusion: It’s worth noting that all the areas we’ve highlighted to this point have nothing to do with one’s skill as a golfer. But even if you are a mediocre golfer, you can still compensate for the sheer volume of shots hit by acknowledging your limitations. Examples: if you’re someone who sprays the ball all over the course, pay extra attention to where it’s going so you don’t waste everyone’s time looking; if you have a remote chance of reaching the green in two or clearing a hazard, just lay up rather than wait for the group ahead to clear. And of course, if you’ve slapped it around on a hole a sufficient amount, be comfortable picking up and moving on. Your playing partners, and group behind, will be grateful that you did.

6. Cellphone abuse: We are hardly anti-technology zealots at Golf Digest, for the simple reason that having a phone and occasionally responding to messages gives golfers the opportunity to be on the course when they otherwise might be confined to an office. But again, timing is everything. For instance, if you know you have to respond to an email, insist you hit your tee shot first and then duck off to tend to business. If there’s an urgent phone call to be made, either do it removed from the action, or you might have to sacrifice your involvement in a hole and catch up when you’re done (social media, meanwhile, is fine when done in stride or when someone else is hitting). That might not be golf as it was intended, but neither are five-hour rounds.

7. Not . . . hitting . . . the . . . ball: Of course, we’d be remiss in not citing the obvious example of spending too much time taking practice swings, waggling and perhaps contemplating life’s deeper questions while staring down at the dimpled sphere between our feet. In a 2016 book,Golf’s 8-Second Secret: What separates golf’s greatest champions, PGA pro Mike Bender and amateur Michael Mercier argued the time from when golfers set their lead foot, step over the ball and swing to the finish should take eight seconds, but that for most of us it takes double that time. That’s an extra 12 minutes for the average 90s-shooter. Multiply that times four golfers in a group and we’re talking an extra 48 minutes that have nothing to do with mindless chatter, checking your phone, or parking your cart in the wrong spot.

Trim some of that fat off your round and you might have more time to actually enjoy yourself.